In spite of millions of voices coming together, the country representatives have ignored the voices and just finalised the text for the disastrous TPP trade deal.
But it is not over!
Every one of the 12 Trans Pacific Partnership countries still has to ratify the deal before it goes into force — which means there is still a great chance for us to stop it.
If just one of the TPP countries doesn’t ratify the deal, it doesn’t pass.

IT IS IMPORTANT TO USE ALL POSSIBLE ENERGY  to push as hard as we can to make sure that the TPP isn’t ratified in all 12 TPP countries.
Exactly what is in the finalised text has not been published and experts are saying it could be 30 days before we even get a look at what’s actually written in the deal.
More details can be seen here in this comprehensive BBC report:
Trans-Pacific free trade deal agreed creating vast partnership, BBC, 5 October 2015 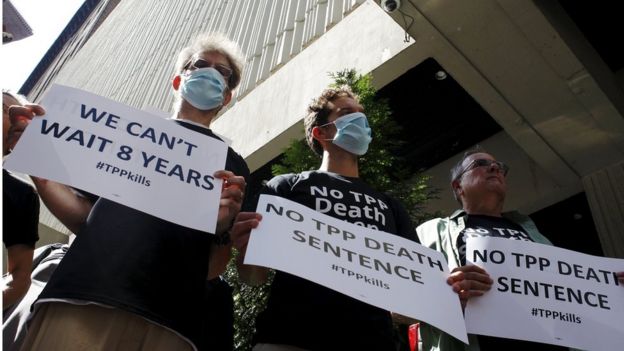 This deal could withhold life-saving essential medicines from those who need them most.

This entry was posted in Uncategorized. Bookmark the permalink.