In 2021 HAIAP celebrates 40 years since our organisation was launched in Geneva in May 1981. See history below.
HAIAP held a celebratory ‘Zoom’ meeting with 65 participants on May 29.
We heard from three of our Founders: Dato’ Seri Anwar Fazal, Dr Mira Shiva and Dr Zafrullah Chowdhury along with our Governing Council Chair – Dr Niyada Kiatying-Angsulee then stories from the field were presented by Professor Kris Weerasuriya, Dr B Ekbal, Prof Michael Tan, Dr Tanveer Ahmed, Professor Manuj Weerasinghe, Dr Sun Kim and Dr Chee Yoke Ling. The presentations had extraordinary depth and breadth and there was something for all generations.
We are extremely grateful to the presenters and participants who shared our celebration. It was wonderful to see so many familiar and new faces. Thank you.
During this year we will develop a book that features historic events and plans for the future – to be released later in the year.

To see the May 29 program and details about the speakers click here
You can see a few screenshots here
The recording can be seen here ( Passcode: sL?bpu8# )
https://tinyurl.com/rnaj8xax
or
https://us02web.zoom.us/rec/share/_5KDHVg4N308A9aLnLnAQfGfQLCvBqqqF0jdXmJx_g1mX39r6mXCpa1RnYee13y4.Olm2ByCX-bhriiSn Passcode: sL?bpu8#

As part of the proceedings two important Awards were announced.
Award 1. The Olle Hansson Award will be recognition of long activism.
Find details here
Award  2.  A 3 -6 month Fellowship at Gonoshasthaya Kendra (Bangladesh) for a younger person activist. Find details here

In addition, a HAIAP – Pharmaceutical Promotion Action Research Project 2021 has been proposed.
Why: Promotion claims for medicines that cannot be substantiated are common and cause harm. Regulation is weak and poorly enforced. There is a need to bring this situation to the attention of consumers, health professionals, the media, and the government.
How: Experienced members of HAIAP will provide health sciences students with experience and assistance in critically assessing medicines advertising claims against scientific evidence, working up complaints to regulators, and publicising the findings.
Full details are available in the proposal. if you are interested to become involved follow the instructions in the proposal.

The Powerpoint presentations from the May 29 can be found below:
Niyada Kiatying Angsulee, Governing Council Chair HAIAP – Significance of HAIAP: past present and future
Dr B Ekbal – Covid-19 Kerala Experience
Prof. Michael Tan – The Philippines – HAI and HAIN
Dr Tanveer Ahmed – HANDS – Pakistan – 41 years of community services
DR Manuj Weerasinghe – The Right to Health in Sri Lanka – Struggle for the past two decades
Dr Sun Kim – People’s Health Movement for Equitable Access to Essential Health Technologies in the context of COVID-19 – In South Korea, South East Asia & Pacific, and beyond
Records of other presentations will be available soon – or listen to the recording at the link supplied above.
………………………………………………………………………………………………………………………..

The birth of Health Action International (HAI) emerged from several streams of thinking, planning, and action – locally and globally.
Firstly, the International Organisation of Consumers Unions (IOCU), later known as Consumers International, did two pioneering global comparative studies in the 1970s: it examined the marketing and labelling of the drug ‘chloramphenicol’ (1972) and ‘clioquinol’ (1975). The results were nothing short of scandalous – double standards, deceit, denial and deliberately taking advantage of countries with weak regulatory authorities, and of the low income countries in general.

Then the IOCU 10th Congress in the Hague in 1981 triggered the historic International Conference on Consumer Health and Safety held in April 1983, in Ranzan, Japan, that brought together many allies who combined their strength over the years.

The inspiration of IBFAN:  Parallel to these efforts was a global campaign to protect the culture of breastfeeding, which had been murderously undermined by a global infant formula industry. The groups developed a loose but effective global network – with a clear vision and target of do-able things – anytime and anywhere. The International Baby Food Action Network (IBFAN)] was born in Geneva in October 1979. It provided the model for HAI. The greatness of the network was its simplicity and the fact that diverse partners were able to engage in diverse ways to link and multiply. What was fortuitous was that so many groups involved in the campaign were ‘development’ and social justice activists who had concerns about the pharmaceutical industry and ‘unhealthy’ business, in general.

The 34th World Health Assembly (WHA), was held in Geneva in May 1981 and representatives from many non-government and activist groups were present including Dato Anwar Fazal.

At that WHA meeting, the World Health Organisation passed (with one dissenting vote from the USA) the Code of Marketing of Breastmilk Substitutes. That was cause for celebration. As part of the celebration, an International NGO Seminar on Pharmaceuticals was organised and co-sponsored by the International Organisation of Consumer Unions (IOCU) and BUKO Pharma, a German-based health activist group (Bundeskongress Entwicklungspolitischer Aktionsgruppen) in Geneva, at the end of this historic WHA meeting from 27-29 May 1981. Representatives of NGOs from 26 countries participated and decided to form Health Action International (HAI), an ‘International Antibody’ to resist Ill-treatment of consumers by Multinational Drug Companies.

The Consumers International Regional office for Asia and the Pacific (CIROAP) agreed to be the clearing house for HAI. Following the recommendation of Mr Anwar Fazal, Director of IOCU ROAP 1975 – 1991, and Dr Prem Chandran John, chairman of the Asian Community Health Action Network (ACHAN), a planning meeting in Penang in 1986 set up Action for Rational Drugs in Asia (ARDA). IOCU ROAP and ACHAN would coordinate the network in Penang as the ARDA network. An important partner was the All India Drug Action Network (AIDAN), founded and Coordinated by Dr Mira Shiva. Other network partners were identified and brought in – together with the Poison Centre at the Science University of Malaysia (USM). That body became a WHO collaboration centre. In Penang there was a close association between the network and the University Medical Faculty under Vice Chancellor Dzulkifli Abdul Razak (Dzul).

The Japan link: The 1979 Kyoto International Conference against Drug-Induced Sufferings was another landmark that linked IOCU to a global network of medical pharmaceuticals and legal specialists.

In the late 1980s, Dr Kumaraiah Balasubramaniam (Bala) took up the position as adviser and coordinator of CIROAP, and relocated to Penang in Malaysia, having been very active on Pharmaceutical issues in UNCTAD and protégé of the great Dr Seneka Bibile in Sri Lanka.

2001 The change to HAIAP and the move to Sri Lanka  A major achievement of the ARDA network was forging a new level of partnerships between the participating organisations. In 1995 an external evaluation of the ARDA network had been done. The evaluation was positive about the need for the network in Asia and the Pacific regions and ARDA was advised to expand membership and work with more network partners. In 2001 ARDA decided at a meeting held 18 – 22 Feb 2002, to relocate out of IOCU ROAP and to set up as an independent NGO based in Colombo Sri Lanka.  For uniformity with the other three HAI centres (Europe, Latin America and Africa) the Asia Pacific office was registered as HAIAP with a Governing Council; and based in Colombo. HAIAP would continue with the campaign issues, rational medicines use and economic matters and take up new issues in the area of poverty health and traditional medicines.

2010 HAIAP Meeting in Sri Lanka. In 2010, the last regional meeting of HAIAP before Dr Bala’s retirement took place at the Tamarind Tree, Minawangoda, Sri Lanka. At that meeting Where There Are No Pharmacists was proudly launched. But also at that meeting we learnt that funding for HAIAP from the Dutch government would not continue. Everyone wanted HAIAP to continue but with no funding there would be major problems. Bala had been in contact with Shila Kaur who had been working with Bala in Penang and she had agreed to coordinate HAIAP from Penang without core funding. She would attempt to find enough employment to support herself and would try to find project grants. So Shila accepted the position as HAIAP coordinator on those terms. Members were very sad to leave Sri Lanka but more than grateful to Shila for allowing us to maintain the HAIAP family.

The HAI / HAIAP story of partnership between North and South, scientists and social activists, between global groups and grassroots’ efforts, made what has been becoming a significant force’.

The rampant globalisation and free marketing within the milieu of a global pandemic are posing enormous challenges but also arousing public interest groups all over the world to join and  strengthen the network for change. To all those who travelled with us over the last 40 years of our journey, we say, Thank you. Keep in touch. Tell us your stories.

HAIAP is part of an independent global network, working to increase access to essential medicines and improve their rational use through: 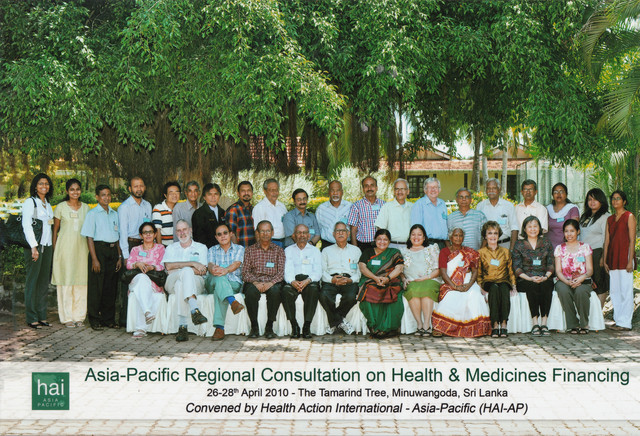 IF DEFENDING AND STRUGGLING FOR THE FULFILMENT OF THE RIGHT TO HEALTH IS CONSIDERED SUBVERSIVE, IT MAKES US SUBVERSIVE. THIS IS AN INVITATION. LET’S ALL SCHEME AND CHALLENGE!  (L.Weinstein)

In the words of a Dean of Johns Hopkins University, work in the health sector requires the flexibility of an earthworm, the ability of a locksmith and the capability of mounting a grand indignation of a lawyer. (…in Philadelphia  in the original quote).

The veritable crisis in health systems failure we see the world over should lead us to a re-think of the triumphalism that has marked some of the global health debate in recent years as the MDGs are evaluated. Some even project a ‘grand convergence within a generation’ between North and South –rich and poor countries– based upon predictions of ‘an end of preventable mortality, including that from infectious diseases’. The truth though is that health systems in too many countries are and have been dysfunctional –way before Ebola hit. (i) Health facilities are often a place where people, especially women and children, experience first-hand their poverty and marginalization. (A.Yamin)

A parable that provides some consolation when, too commonly, a ton of effort produces nothing, or at best, just an ounce of movement.

It is the story of a just man who went to the city of Sodom, hoping to save the people from sin and punishment. He cried out in the streets and the square, preaching his message of hope, his promise of redemption. But no one listened and no one responded but still he continued to cried out. Then, one day, a child stopped him in the street asking, “why do you continue to cry out when no one listens?”
And the man answered, “When I first came to this city I cried out hoping to change the people. Now I know that I am helpless to change them. If I continue to cry out today it is mainly to prevent the people from changing me!”

HAI Network
To view our network’s activities and publications
visit the websites below:

HAIAP Web: http://www.haiasiapacific.org
Web-master Beverley Snell
Email:  Beverleyfsnell[AT]gmail.com
We welcome feedback and suggestions and material to include.
Contact the webmaster at: Beverleyfsnell(at)gmail.com
To contact email addresses supplied on the site, please rewrite them into your own email program.